As we saw in an earlier post, a CPU only listens in binary. Of the vast infinity of real numbers, it can only make out 0 or 1. (Of course, we could have called these 2 and 5, 1500000829 and 469, or whatever other pair. The point is that there are only two elements to things: Ying-Yang, Good-Evil, Light-Dark, etc.) All data is stored in a computer’s memory as binary digits.

A bit is one binary digit:

Since only two different kinds of values can go in each slot, we call this base 2 system. By contrast, most people are accustomed to the decimal (base 10) system, in which every individual slot can hold one of the values from 0 through 9.

The hexadecimal uses letters instead of going from 0 to 15 because encoding the idea of 15 or 12 or 13 using two symbols would go against the correspondence of one symbol per slot.

So lets analyze the funniest three digit number in the decimal system, one that is a Sophie Germain prime, the international calling code for Bulgaria, the year of Barbatio’s death, yup, you guessed it: 359.

Therefore, we can write 359 as

For example, the binary number 11011 can be written as 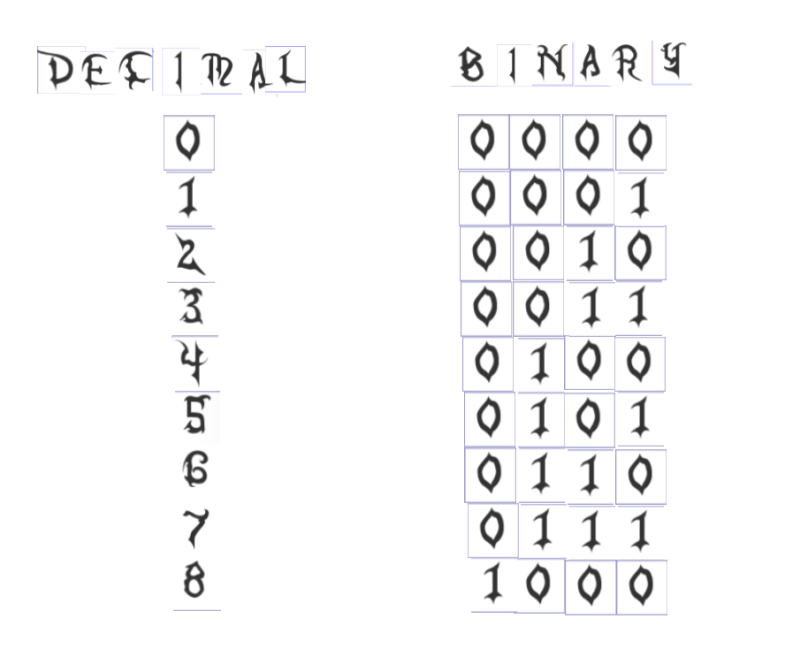 Because computers store numbers as binary, and people recognize numbers as decimal values, conversion between the decimal and binary number systems often takes place inside a computer.

Using this method, we can calculate the equivalent of the binary number 11010 in our decimal system.

The strategy to decompose a decimal number into a sum of powers of 2 is simple: first find the largest power of 2 that is smaller than or equal to the decimal number, then do the same with the remainder, and so on, until you reach 0.

So we now have

Removing the power of 2 multipliers, 359 can be represented in the binary system as